Send Form to TRU
Have TRU Call You

TRU Group Inc, Tucson AZ, USA Toronto ON preview of website release November 01, 2017- Manufacturing engineering consultants TRU says that in the era of the Trump Administration its 2015 observations that US manufacturing “falls short on Production Process Sophistication compared to its competitors" has even more relevance. US manufacturing now ranks an abysmal 9th position globally on production process sophistication. TRU president Edward Anderson says "Going forward 2017, TRU projects tough times for manufacturing and the need for the aggressive implementation on advanced manufacturing could not be more urgent. R&D expenditures relative to output by US manufacturers has not increased since 2008. The current level of manufacturing capacity utilization at 75.2% (latest 3rdQ 2017) is too low and we believe the index is set to fall further longer term. Although by mid-2017 the US dollar was weakening - providing some short term relief relief for US manufacturers against foreign competitors. But longer term a radical strategic change must be made to how products are manufactured in the United States. US Manufacturing lacks a solid competitive foundation - it ranked only 16th globally in "nature of competitive advantage" The reality is that US manufacturing faces huge challenges with or without the stress inherent in the radical changes in the trade policies envisaged by 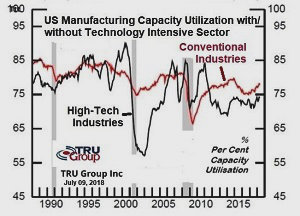 the Trump Administration". Unfortunately, the Trump debacle in the Presidents Manufacturing Council (dissolved by him August 16, 2017) signals further challenges for manufacturing as CEO' distance themselves from the President. See Industry Production (IP) Chart above right titled "US Manufacturing Index with and without Tech Intensive"since 1988. For period 1990-2018 see left a truly compelling direct comparison between "conventional" versus "high-tech" manufacturing capacity utilization (updated July 2018)

TRU Group Inc, Tucson AZ, USA Toronto ON release May 18, 2015 - Manufacturing engineering consultants TRU says that the US focus on Technology Intensive Manufacturing* is good but more implementation (and less talk) would contribute greatly to a stronger domestic production capability overall. TRU president Edward Anderson says the US domestic technology intensive manufacturing should be performing better compared to the conventional production and may be held back by management timidity. Seems that since the 2001 recession (when fabless or off-shore manufacturing were in vogue) production strategies have strayed off course".

The number of manufacturing plants operating in the US declined from around 400,000 in 2001 to 230,000 in 2014. According to MAPI (Manufacturers Alliance for Productivity and Innovation) the geographic composition of trade in manufactures changed radically during this period too: The US share of global exports declined from 19% to 12% while the Chinese share soared from 7% to 23%. MAPI reported March 10, 2015: "The rapid growth of offshoring, defined as the substitution of imported intermediates from low-cost countries for domestically produced goods and services, is widely believed to be the major cause for the fast disappearance of industrial capacities in the U.S. since 2000".

Anderson Agrees: "I believe the downfall of manufacturing was caused by shortsighted strategists in the US management unlike in either Germany or Japan".One may ask, where were the visionary American management leaders in the early 2000s that Tesla Motors now clearly possess, having recently begun production at a huge Nevada based lithium battery plant. . “America ranks highly in economic competitiveness and the capacity for innovation but falls short on Production Process Sophistication compared to its competitors" says Anderson. The Tesla Plant will be associated with new innovative products, materials and likely employ some of the most advanced manufacturing methods available. See table left titled "American vs Global Competitor Ranking in Manufacturing Performance"

* "Technology Intensive" in the index are defined as semiconductors & related electronics, communications equipment and computer manufacturing.

TRU Group Inc are industrial management and engineering consultants with a strong capability in manufacturing project development. . TRU Manufacturing Team has advised a number of players on a wide variety of manufacturing, engineering, process, business and investment issues.